What do you call a gift that lasts forever? It has a name: Endowment

Create an endowment and your gift will go on giving in perpetuity, which is just another way of saying forever! Your endowment can help you achieve your philanthropic goals and create a legacy at Mizzou.

Your endowment is a way to give a gift that benefits the University in perpetuity. A fund is created from your gift, and each year, a distribution is made from the fund based on a formula that makes sure the endowment sustains its buying power over time. Not Sure How to Begin Planning?

Fund Your Donation With:

An Example From Mizzou 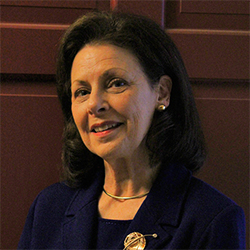 The law careers of Cathy Dean, BA '70, JD '82, and her late husband Kenneth Preston Dean, BA '68, JD '71, spanned nearly 40 years and left an indelible mark on the legal landscape of Kansas City, the state of Missouri and the Midwest region.

In 2003, the couple established the LSF Preston and Cathy Dean Scholarship Endowment Fund. When asked what motivated them to set up their endowment, Cathy said, "People helped us when we were going to school to get an education."

Preston's grandparents founded the Dean Drugstore in Mexico, which his father took over. When Dean was 16, his father was killed in an armed robbery. His mother, Mildred, continued to work at the drugstore and later worked at a radio station raising Preston and his younger sister and putting them both through college. When in law school, Preston got a scholarship that enabled him to keep going. Cathy said, "When the law school dean gave Preston the scholarship, he encouraged Preston to do the same for others someday." After he graduated from law school, he put Cathy through law school as he worked at the attorney general's office.

Cathy's reasons are even more personal. Early in her teaching career, Cathy asked another teacher who did not have any children, "'What will we do if we do not have children?' Her answer has become one of my mottos: 'We help those who do have children.' For me, this is my way of fulfilling my motto.

Have you already included MU in your estate plan?

Let Us Know
Back to Top

A charitable bequest is one or two sentences in your will or living trust that leave to the University of Missouri a specific item, an amount of money, a gift contingent upon certain events or a percentage of your estate.

an individual or organization designated to receive benefits or funds under a will or other contract, such as an insurance policy, trust or retirement plan

"I give to the University of Missouri, a nonprofit corporation currently located at 302 Reynolds Alumni Center, Columbia, MO 65211, or its successor thereto, ______________ [written amount or percentage of the estate or description of property] for its unrestricted use and purpose."

able to be changed or cancelled

A revocable living trust is set up during your lifetime and can be revoked at any time before death. They allow assets held in the trust to pass directly to beneficiaries without probate court proceedings and can also reduce federal estate taxes.

cannot be changed or cancelled

the original value of an asset, such as stock, before its appreciation or depreciation

the price a willing buyer and willing seller can agree on

the part of an estate left after debts, taxes and specific bequests have been paid

a written and properly witnessed legal change to a will

the person named in a will to manage the estate, collect the property, pay any debt, and distribute property according to the will

A donor advised fund is an account that you set up but which is managed by a nonprofit organization. You contribute to the account, which grows tax-free. You can recommend how much (and how often) you want to distribute money from that fund to Mizzou or other charities. You cannot direct the gifts.

An endowed gift can create a new endowment or add to an existing endowment. The principal of the endowment is invested and a portion of the principal’s earnings are used each year to support our mission.

Tax on the growth in value of an asset—such as real estate or stock—since its original purchase.

Securities, real estate or any other property having a fair market value greater than its original purchase price.

A charitable remainder trust provides you or other named individuals income each year for life or a period not exceeding 20 years from assets you give to the trust you create.

You give assets to a trust that pays our organization set payments for a number of years, which you choose. The longer the length of time, the better the potential tax savings to you. When the term is up, the remaining trust assets go to you, your family or other beneficiaries you select. This is an excellent way to transfer property to family members at a minimal cost.

You fund this type of trust with cash or appreciated assets—and may qualify for a federal income tax charitable deduction when you itemize. You can also make additional gifts; each one also qualifies for a tax deduction. The trust pays you, each year, a variable amount based on a fixed percentage of the fair market value of the trust assets. When the trust terminates, the remaining principal goes to Mizzou as a lump sum.

You fund this trust with cash or appreciated assets—and may qualify for a federal income tax charitable deduction when you itemize. Each year the trust pays you or another named individual the same dollar amount you choose at the start. When the trust terminates, the remaining principal goes to Mizzou as a lump sum.

A beneficiary designation clearly identifies how specific assets will be distributed after your death.

A charitable gift annuity involves a simple contract between you and Mizzou where you agree to make a gift to Mizzou and we, in return, agree to pay you (and someone else, if you choose) a fixed amount each year for the rest of your life.